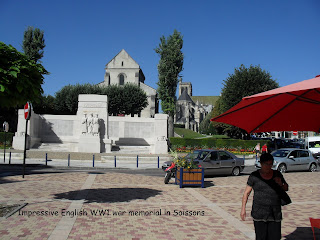 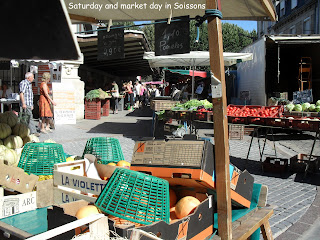 Soissons is an OK place to spend a few days resting up after a long haul from the south.

Walking around the town we found this WW1 war memorial dedicated to the hundreds of british lads who lost their lives defending this town and the surrounding area.  I have commented before on the number of war memorials around France we have found but it is only when you stand in front of one like this and read the names and ages of the youngsters who died that you cannot help the emotions welling up inside and feeling very sad, and angry at the loss of a generation.

There are two markets a week the big one being on a Saturday where most of the town centre is occupied by numerous stalls selling all kinds of food and non-food stuff. I have a negative comment on the french markets. They are given lots of spotlight by the town and the tourist offices throughout France but my overall impression is that they maybe passed their sell by date.

When I first started coming to France, too many years ago to record, I remember the markets being the bargain hunters paradise with cheap and local food produce all in season and bargain clothes etc, what we have now is open air shops but with higher prices. All the boaters I have met now head for the nearest Lidl or Aldi, the boaters friend as they have become known, and most towns now have a large hypermarket LeClerc or Intermache where the fruit and veg is higher quality in general than the markets and cheaper…am I sounding like a grumpy old man..I think so. 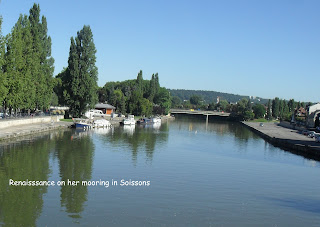 Despite all the above we still go to every market we find on our way as the atmosphere is still good .

We have secured a good mooring here is Soissons, not difficult, as there is a very long quay with plenty of electric and water points. The costs of staying here is also good and the girl from the tourist office was willing to do a deal if we stayed for the week, only 18 euros all in with the water and electric included, just over 2 euro a day… not bad.

The weather has picked up in the last week but today overcast and threat of the odd thunderstorm, but generally the forecast for next week is pretty good, hope so for Lizzie and the girls when they arrive for their holiday at the end of this week.

Been doing some planning this week regarding the trip back south to the winter moorings.
It is a massive trip of nearly 700 kilometers and when you consider a good day for us is when we complete 20-30 kilometers in a day depending on the number of locks, and we don’t want to travel every day. So it is going to take a while maybe touching November before we get settled down for the winter in Montceau. Looking forward to it still as most of the return trip will be on new canals and rivers, and as we plan only to travel to about luchtime each day it gives plenty of time to explore new places.