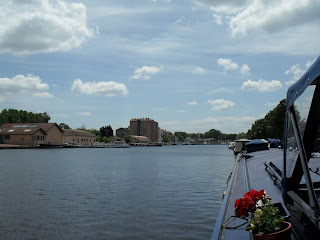 Yes we finally got everything fixed on the boat and headed down to Roanne. We arrived yesterday Tuesday 6 July to some brisk winds and clouds. However, we have awoke this morning to to cloudless sky and high temperatures, again.

The trip down the Digion-Roanne canal was interesting. The canal was considered for closure back in the 1970’s and has suffered a series of breaches over the years which has closed the canal for months at a time, in the last three years it has suffered two further breaches which has trapped boaters for months. At the start of the canal at Digion there is a series of three new automatic locks, although at the moment still assisited by a lockeeper, and the canal has a clean and well maintained look, however, after these first few kilometeres the canal lapses into a look of neglect and overgrowth.

In places, along the banks mostly on the right going towards Roanne, the canal is very shallow and has a lot of overhanging trees and undergrowth. This makes it hazardous if like us you spot a large wide restaurant boat coming your way and have to move over. Luckily we were not in too bad a position, if it had been a little earlier we could have swept the top of the boat clean, and grounded.

A word to the wise if anyone reading this is coming to Roanne any time soon, the middle lock of 3 (Montgrailloux 5) at PK33 has a very violent sluis at the entrance which throws you about badly, and once you are in, tied up and recovered, the incoming water is like a wave machine at a swimming pool. It isn’t the best kept lock we’ve ever seen on our travels, seems no effort at all has been made here in the weeding and planting department, made us wonder what else we were in for.

We moored for the night in a small Hault Fluvial basin at Artaix, basic but tidy and cleanand very calm, a few other boats , and some camper vans too, they seem to be very popular here, totally understandable it’s a beautiful area.

As we travelled on in the morning the canal became more attractive and better maintained, still a little shallow here and there at the sides. Some of the bridges are low and very narrow, especially at PK21, we now know why that resaurant boat had no fenders out.

Our “nature watch” today was varied and interesting. We came across a fabulous looking coloured pony outside the back of a canalside house, a large hawk just sat on the towpath that just studied us as we passed, we hoped it was being lazy not injured. And , instead of flies we had to swat all day yesterday, we had an abundance of the most beautiful damsiel flies, they have turquoise coloured bodies and their wings look like navy blue velvet. They are very friendly and land close to if not on you, so you can get a really good look at them. Now for the Kangaroos? Yes two little joeys in the undergrowth , shy just poking their heads up, I could not believe it and Terry says it was probably small deer as why would kangaroos be here? …I know what I saw and I had not been drinking…honest.