Well after we  thought that we were entering a non WI-FI  stretch, we pulled up at the delightful Pont Royal, just 18km and 13 locks down from Pouilly. and there is excellent free WI-FI from the hotel by the port. 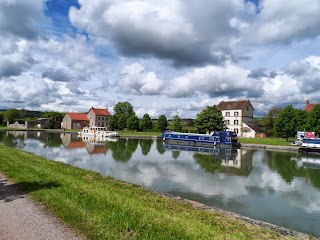 So a quick Blog post is called for.  As everyone in northern Europe including the UK knows this has been a very poor start to the summer, plenty of rain and cold winds, but the weather forecast says that summer will start on Sunday and next week it looks like shorts and barbecue time, about ruddy time.

Whilst we were at Pouilly we did have one great day on Monday, the sun shone it was warm and everybody emerged from their boats and had a get together over a game of boules and a lot of chat and plenty of drink.
That community spirit is what this lark is all about. 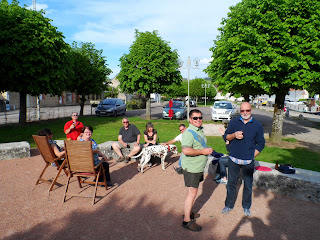 I did manage to get fuel for the boat having borrowed Adrian’s bike and trailer, only told him later that I had not ridden an ordinary bike for years, but as they say you don’t lose it, albeit a little bit wobbly. 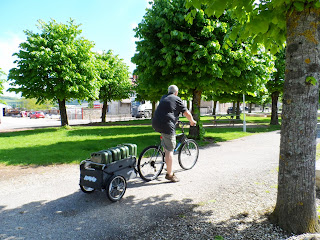 Note to self I must get myself a bike when I can get a bike rack installed on the back of the boat.

It seems that most boats now come with a cute dog and they were all at Pouilly.  Luckily they all got on well with no punch ups. 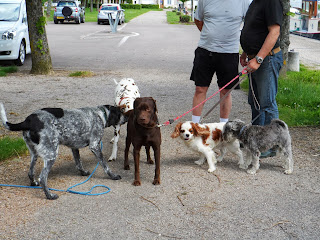 Onward and downwards now with the next stretch having 41 locks in the next 18 km!! to Venarey.