This is the first time we have had to stop with good WI-Fi service to really update the Blog.  So what has happened so far? 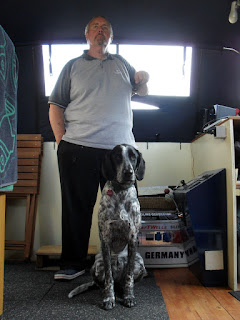 We finally left the repair and painting spot at Blanzy and winter mooring at Montceau and started 2012 in fine weather, it was not to last.  We took it very easy first day and said goodbye to Montceau on route with great waves from Nathalie for the office and it was great to see Lens boat up and floating on the water at last. 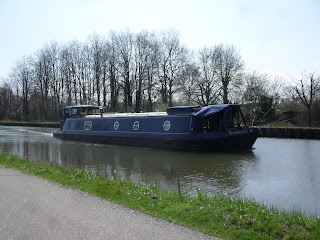 The locks were fine although there were a few delays these were short in duration and did not hold us up.  The lock keepers were very friendly and remembered us from last year, they must be worried about their future as the Canal is under serious threat of closure due to lack of water.  At the moment it has reopened but it is due to close again May 20 for the whole summer, unless there is significant rainfall in the meantime.
Gladys was confused at first, not an unusual occurrence, as she felt that it was time for a walk time every time we stopped for a lock, she soon relaxed and slept for the final few hours, back in normal cruise mode.
We stopped at Genelard it was very quiet there is one other English boat Carol heading towards Montceau and a German yacht heading in the same direction.  No boats going our way so no locking problems  as we headed for  Digoin tomorrow and onwards to Gannay before the weather breaks. During this part of the trip we encountered lots of wildlife. 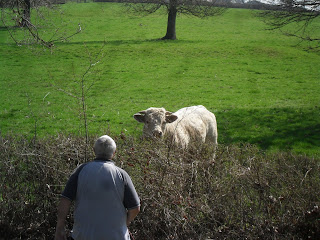 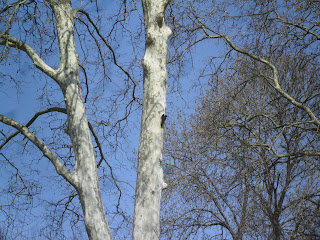 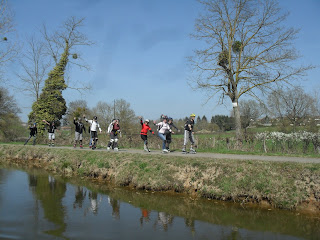 Including humans on roller blades!
We made Ganany to hopefully meet up with Mark and Celia but unfortunately they have been held up in the UK and did not get back before we left to start 2012 cruising in earnest.  Before we left we met up with Carmen and Marco at Gannay and Len and Sue from Montceau.  Teresa had offered to make Len some new curtains for his re-floated boat and he brought the material and the old curtains as a pattern.  We all had a nice  4 course lunch at the cafe by the port, and Len forgot his wallet, well he is an Aussie!!!!. 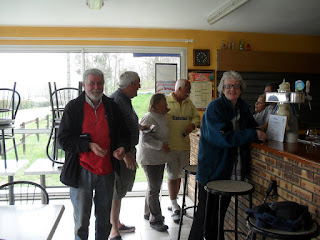 We pushed on when we left Gannay and stopped for a few days at Cours-Les-Barres Pk 120, to finish Lens curtains and explore the area. 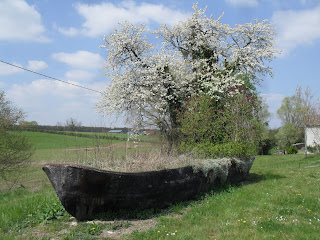 After another visit from Len and Sue to collect the finished curtains we pushed on to the Canal Braire.  The shorts and T-shirts have been replaced by jogging bottoms and heavy jumpers as its ruddy freezing and lots of rain.  We have moved on to a great stop at Chatillon-Coligny with WI-Fi and a great historical town.  There is a market tomorrow and Len has sent some post from Montceau so we will stay for the weekend.