Fat bloke in France, getting slim?? 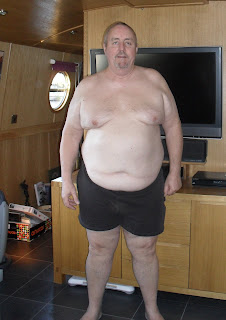 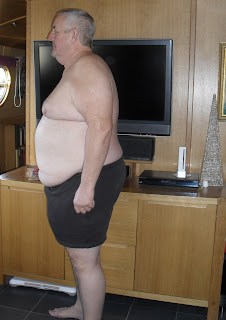 Well the time has come for some drastic physical action.

I took a long look in the mirror this morning and realised that I was grossly overweight.  It wasn’t just this morning I have known for a long time, many years in fact that I was seriously overweight.  The problem is that up until now I have had relatively few health problems.  However, the body is starting to rebel, big time and if I don’t do something positive and relatively drastic, I will not make old bones, and I love my current life on board the boat with my current wife, and want it to continue for many years to come.
So the thing I have decided to do is to include my Blog followers in my quest to get to a healthier weight, and the first step is to put my current image out there, knowing that it is not a pretty sight, and to make a statement of intent, which I will update once a month.  The statement is in three parts:

(B)That by spring , that is the end of March 2011, when we leave Montceau I will lose 3 stone, or 42lbs or 31 Kgs
(C)That by the summer solstice, 21 June 20011, I will lose a further 3 stone.
I will not discuss my weight generally on the Blog as that would be boring,  all I will do is give a monthly update with pictures at the start of each month.   I will also not go on any crash diets or eat stuff I don’t like,  that way lies madness.  I will eat less and exercise more.  I will avoid beer and spirits but will continue to drink wine.  I will avoid sweet things and excessive carbohydrates but good food smaller portions and more exercise will hopefully do the trick.  Watch this space!!