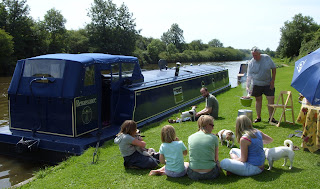 What a lovely day, a rare treat this summer the weather was glorious and everybody was well chilled out, even the dogs, for jJack Russell’s that is special.

The little BBQ featured in the picture is a real find around £5 from Sainsbury’s, it’s called a bucket BBQ and it works absolutely brilliantly. I have BBQ on countless bits of kit over many years form grandiose Australian monsters to an ex ammo box from the army, but nothing has been as simple and efficient as this little beauty.

We are getting used to the boat, its limitations and opportunities. The solar panels I fitted yesterday will help in making us less dependent on shore power, and its the little things that seem so important but are in fact mere add on’s that when you don’t have them you really don’t miss, the TV is probably the best example. I have a satellite dish and if I could be bothered I would fiddle with it until we had a picture but you know what when you are chilling on the tow path, then clearing up and settling down with my laptop in the evening, the lack of TV is so unimportant. I probably will change my hippy tune when the football season starts in earnest this coming week, but we have the radio for the news and sport so maybe not.

More preparation this week with a visit to the marina where the boat will be lifted out and put on a lorry heading back to Poland and dropping off my boat , oops, in Holland on the way. If anyone is free I could do with a crew member or two to move the boat to the marina via the river Severn and the Avon in late September, please leave a comment.