England to Belgium what a week! 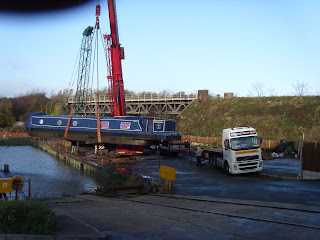 We were waiting for what seemed an eternity in Evesham, getting all the elements in place, 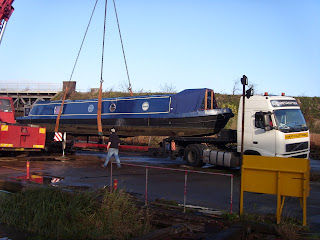 for the move to Europe. At last the day dawned last Wednesday 25th Nov. The lorry had arrived the night before so we knew we were on our way the following morning.
The crane arrived on time and within the hour the boat was on the lorry, and at 10.30 the lorry left for the Ramsgate – Ostend ferry. The weather was ok for the lift, but the weather forecast was awful for the next few days, so we headed for the channel tunnel, with the plan to stay in an hotel in Ostend on Wednesady night and up and ready at the fishing port in Ostend to receive the boat off the lorry on Thursday morning.
The boat arrived at the drop in point on Thursday morning but the crane operator and the shipyard were unhappy about an attempt to put the boat in driving rain and strong winds. We delayed the process for an hour as the forecast suggested that the winds may ease later.
In the end the winds did ease, not the rain as can be seen from the picture it was really lashing down, enough for an attempt, but they brought up a heavier crane and more men. 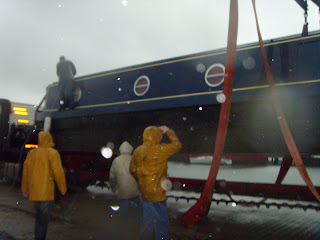 The picture shows the conditions and they were so bad that water got in the camera at this point so this was the last picture Terry was able to take before it finaly packed up.

This is a shame because we have no pictures of the trip from Ostend to Gent and it is a very beautiful canal with some glorious buildings especially around Brugge and Gent.

Anyway I will describe the trip briefly.

We spent the night in Ostend fishing port on Thursday and prepared the boat for the Trip to Gent which we thought would take two days, but in the end took 3. The canal was empty which was good in one way in that we did not have to compete for space with the really big commercial boats, but because we were the only boat on the waterway, all the locks and lifting bridges took ages to navigate because each bridge and lock control keep us waiting in the hope of putting more boats through at any one time. We were in no particular hurry so we chilled out between locks and bridges and it was fine. A relaxed and relatively incident free trip.

We spent friday night at a makeshift mooring outside Brugge. Saturday was mostly spent negotiating Brugge locks and lifting bridges. It is an unusal system in Brugge with a mobile team traveling the system opening the very busy road traffic bridges one at a time. The main lock was huge, it was 90 meters long and 70 meters wide!!! we felt like a stick in a forest. but it only rises 1.7m (less than 6′) so apart from the size of the thing it was very gentle.

We spent Saturday night moored by a huge factory in the middle of nowhere some distance from the outskirts of Gent. Not a problem but very dark and quite no sign of anybody not even a dog or cat about.

Sunday morning dawned and we got underway early to make sure we made the mooring in Gent by nightfall. Again we were the only traffic on the waterway, but the boat was behaving itself and we made good progress and entered the inner Gent system around midday. it was a narrow waterway to ther mooring with lots of moored boats for the winter.

We moored up well and sorted out the electric and water hook up got the TV working made up a good fire on the stove. Very cosy and we both slept well that first night in Gent