Decize and back again 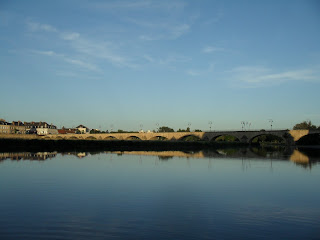 Well we are here at decize, again, great little town, full of history and friendly locals, that’s why we came back when we had to wait for our inverter to be sent to Holland and repaired  and returned.
As it turned out the factory could find no fault with the inverter, which makes no sense as it was dead as a dodo before and when the boatyard removed it and tested it before sending it to Holland.  The boatyard people are as baffled as me but assure me that it will now be fine if the factory says so, they feel something happened in transit to correct the fault,  who knows.
Anyway, the inverter is back at the boatyard in Ganny now and we will travel up to them tomorrow and have it fitted back in on Saturday morning.
It may seem from the blog entries that we have had nothing but trouble with the boat, that is not the true picture, we have put the boat under a lot of strain since leaving Belgium in March this year, traveling hundreds of kilometeres in a short space of time so any little defect was bound to be found out,: The alternator leads were not substantial enough, they were replaced: the bow thruster was fiited without a thermal cut out , that has now been replaced and we now have a new bowthruster supplied under warranty and with a thermal cut out; the inverter has now been sorted and although this has meant we have spent longer in certain locations than planned it has allowed a lot of little jobs to be undertaken and completed and a more detailed discovery of the places we have stayed.
In the last few weeks the weather has been glorious and we have met and enjoyed the company many new friends.   Not a bad life really!!
The photo above is the view at dusk from the mooring at Decize other latest photos can be viewed at
http://picasaweb.google.co.uk/terrybarrett42/Decize#