We left the lovely mooring on the Belgium border at Leers on the Roubaix canal and headed for Gent.
We are very familiar with Gent it is where we spent a winter 3 years ago when we first came over the channel.  However, things were somewhat different after our 3 year absence, restaurants and bars we frequented then have changed hands or closed down, also the crowds which were absent in the winter swarmed the medieval streets, and changed the atmosphere.  The other decisive change was the lack of a fuel barge for pleasure boats in Gent.  We finished up borrowing a trolley from a fellow boater and   wandering the streets looking for a petrol station.  We did find one but about a kilometre for the boat and after one trip we decided that was enough. 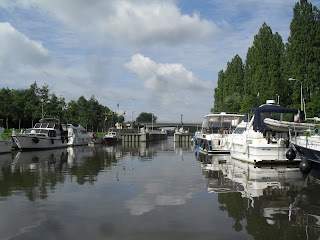 We left the centre of Gent on Saturday and headed for the large lock on the main canal to Antwerp.  We found a great mooring on the outskirts of Gent and spent two nights there before joining Gent –Antwerp canal at 10.30. This was a controlled time as the canal to Antwerp is tidal and you need to leave at high tide so you get the benefit of the tide for at least six hours. We appreciated the tide and we averaged 11kph for the trip to Temse where we found a fuel barge, yippee. 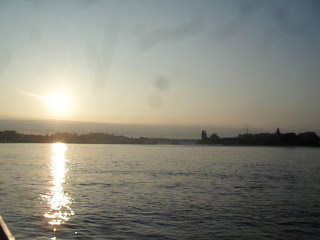 The wide expanse of the Gent Antwerp canal.
We gratefully filled up in the morning, although the cost was an expensive experience and we began to query our plans for this year.  Also the moorings in Belgium and Holland are generally now 1euro per meter per night, plus electric and water and for us at 18 meters we are paying out upwards of 25 euros per night which is unsustainable on our pensions.  So when we arrived at Lier we had a big heart to heart and realised that a change of plan was necessary. 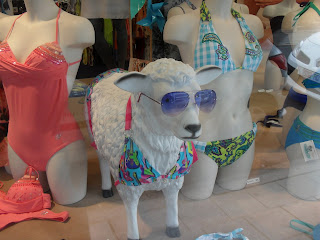 However,Lier is a beautiful place with some interesting shop displays.
Tomorrow we will turn around and head back towards France, via the Roubaix, and Somme canals, which we greatly enjoyed.