Yes here we are in Belgium, well only just, I took Gladys for a walk this morning back into France!
In fact where we are parked (sorry moored) is by a splendid café and next to the café is a customs post, not used anymore but just an historic reminder of pre-European union. 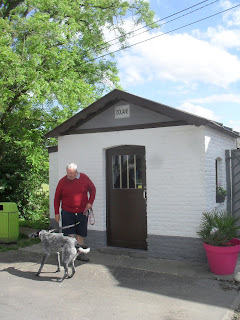 We have had an interesting last few days leaving the beautiful Somme canal and journeying on the commercial canals of the Canal du Nord with its 5 kilometre tunnel with passing section in the middle!! , 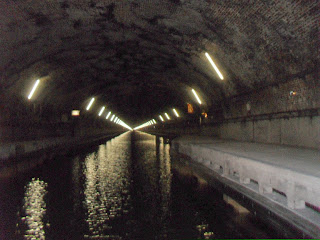 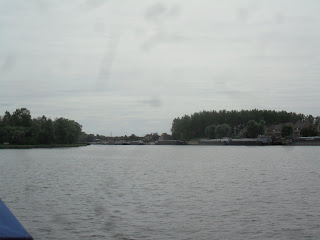 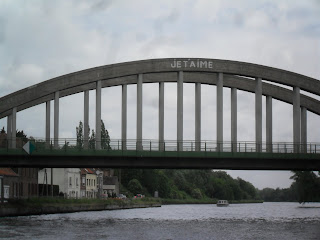 before entering our next goal that of the re-opened  Roubaix canal which links France and Belgium but has been closed for many years and has had millions of euros spent on it to bring it back into operation.
We moored on the Roubaix after the first lock which is still controlled by VNF.  The next morning we met up with Camille and some of her canal staff who would take us through the locks and lifting bridges of the Roubaix. 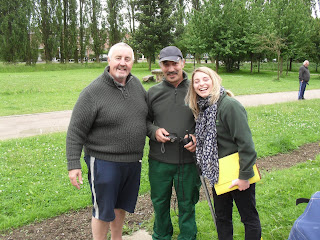 Camille and Said
Everyone was very pleased to see us and the local shouted and waved from the banks, we were only the 25th boat to pass through since the re-opening in April. No wonder they were pleased, rather than a silted up rubbish tip running through their villages and towns they now had a cleaned up and functioning canal with boats passing by. 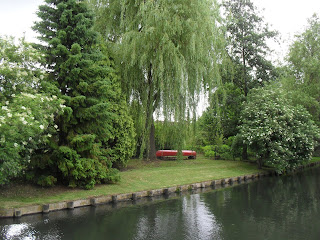 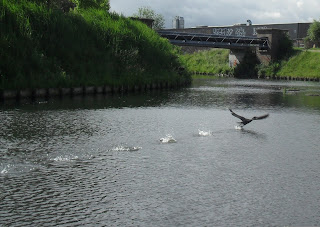 It is a short canal only 20 kilometres long and we stopped for the night in the town of Roubaix itself, in fact we moored in the pound that will host the canal festival in September this year, if all 25 boats turn up we are going to need a firm boat park marshal to ensure we get everyone in. 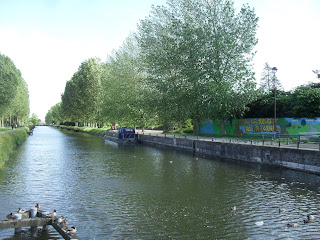 Progress is slow on the Roubaix as there so many locks and lifting bridges in a very short distance.  The 2 itinerant keepers we had with us, Said and Mustafa, were an absolute delight, they are obviously inexperienced and learning new stuff with each passing boat, but they could not have been more helpful and friendly; 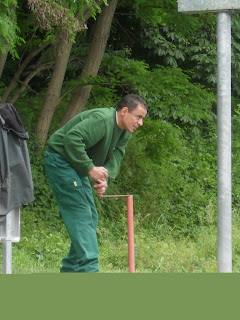 Mustafa winding the only mechanical lock on the system.
The biggest hold up is at the lifting bridges.  Each bridge Said and Mustafa had to put on their hi-vis jackets and stop the traffic before raising the bridges, in fact at the two new lifting bridges in the centre of Roubaix they have to raise both at the same time and close of four roads which meant 2 extra staff had to also put on their hi-vis and join the fun. 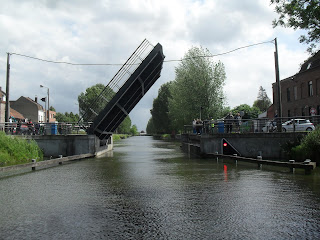 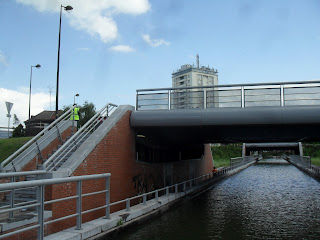 Yesterday morning, Saturday, we left Roubaix to complete the last 6 kilometres of the French section and arrived at the border 2hours later.  There are no facilities on the French section although water and electric points are being installed in Roubaix and will be operational in time for the rally in September.
However, there are facilities at the Belgium border and what turned out to be a splendid café severing great Belgium beer and food.  All in all this stop ticks all the boxes; good electric and water; superb walks for Gladys; excellent TV reception, so I  could catch up on all the sport this weekend; free Wi-Fi; and the café which put on a splendid spectacular and very camp show last night. 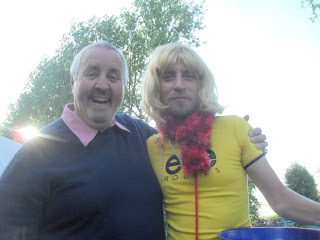 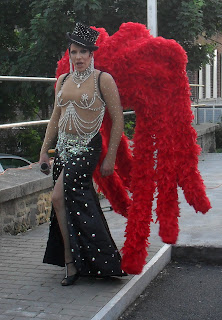 Some splendid costumes were worn by the drag artists 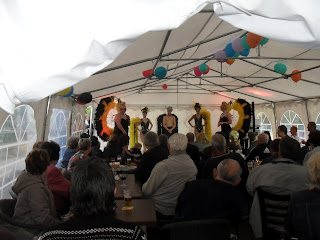 and is was a spectacular show,… welcome to Belgium.

Great stop might stay here for the rest of the summer!!  We will move on reluctantly on Tuesday towards Kortrijk and Gent.

Just a little silly joke to finish today, sent to me from our dear friend Celia;
A frog goes into a bank and approaches the teller. He can see from her nameplate that her name is Patricia Whack.
“Miss Whack, I’d like to get a $30,000 loan to take a holiday.” Patty looks at the frog in disbelief and asks his name. The frog says his name is Kermit Jagger, his dad is Mick Jagger, and that it’s
okay, he knows the bank manager.

Patty explains that he will need to secure the loan with some collateral. The frog says, “Sure. I have this,” and produces a tiny porcelain elephant, about an inch tall, bright pink and perfectly formed.

Very confused, Patty explains that she’ll have to consult with the bank manager and disappears into a back office. She finds the manager and says, “There’s a frog called Kermit Jagger out there who claims to know you and wants to borrow $30,000, and he wants to use this as collateral.”

She holds up the tiny pink elephant. “I mean, what in the world is this?”

The bank manager looks back at her and says;

“It’s a knickknack, Patty Whack. Give the frog a loan, His old man’s a Rolling Stone.”