At last the weather has perked up and we have for the last week been bathed in sunshine during the day and balmy evenings when the sun sinks and the smell of barbecue fills the nighty air. 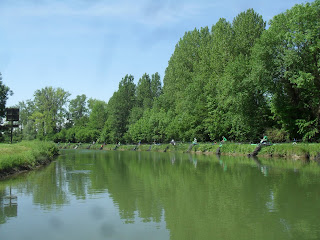 From Sillery we cruised the rest of the Canal de l’Aisne a la Marne before turning left onto the short section of the canal lateral a l’Aisne and then at last we joined a waterway that was  new to us  the  canal de l’Oise a l’Aisne and we headed for the canal du Nord.  We knew that both these latest canals were heavily used by commercial boats and were using them only as a route to the Canal de la Somme, but what a delight we found. 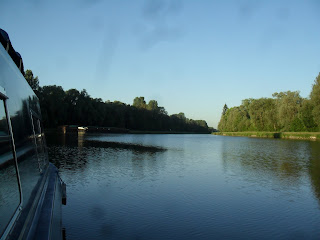 Both these canals were indeed frequented by many commercial boats but the canals themselves were beautiful, very well kept and with efficient lock keepers.  The weather helped, it was now glorious, and the boat was handling well, what was not to like and smile about.
We arrived at our first target, the canal de la Somme just after Peronne on Sunday 27th May.  The difference between the Canal du Nord and the Somme was startling, the Nord was long wide stretches of neat canal and the Somme was more random, much narrower and bendy.  We arrived at the first lock on the Somme and were greeted by a very friendly lock keeper who gave us a leaflet and map of the canal de la Somme showing all the locks, bridges and mooring sites. 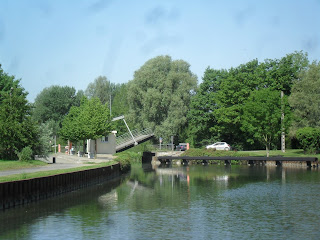 We stopped at Cappy the first night a delightful little town and met up with Paul and Dawn on Casey May Too and had a pleasant evening chewing the cud and putting the world to rights as you do.  Last night we had the barbeque out but before that we had nothing suitable for a barbeque in the fridge but  on a short stroll into town to see the famous WW1 statue of soldier with wounded horse 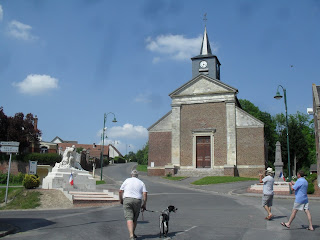 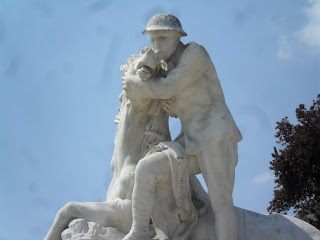 we also encountered the local butcher in his van  and  flagged him down, he  stopped in the middle of the road undid the side of the van and was happy to sell us some great meat for the Barbie, only in France. 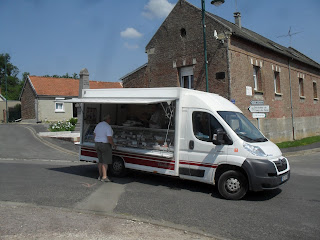