Day 5
Took us the short trip from Beaulon to Gannay where we had arranged for some new batteries to be installed with Uncle Mark at Entente Marine.  I had picked up the battery plywood box the previous day and painted it up ready for the installation.
The moorings at Entente Marine were as usual quite packed so we moored up behind Mark’s barge ‘Little Mouse’.  Len and Marion the mad Australians are also here, they wintered their boat, ‘Pierre Le Renard’ in Montceau-Les mines so we know them quite well, nice couple but they don’t see remarks about the Ashes as being funny….strange that! As they say in the military, ‘Cannot take a joke should not have joined’
Day 6
Started out at 4.30 in the morning with strange thrashing sounds coming from the outside the boat. I got up and opened the hatch and looked out using the torch and found a poor young deer trapped between our boat and the canal bank.  The thing was obviously in distress and very trapped.  Teresa woke and held the torch whilst I pulled the creature from its watery trap.  Deer are normally very shy creatures and will take flight at the first sight of any human being but this one was so cold and stressed out it simply lay on the ground shivering with cold and shock.  It let us lift it onto a towel and use another towel to rub it dry.   I thought it would not make it for a couple of hours but as the sun came up it perked up and eventually got to its feet and wandered away.  A very privileged start to the day.
The rest of the day was reasonably mundane after that but we did get the new batteries installed in the boat. 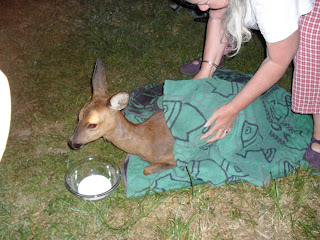 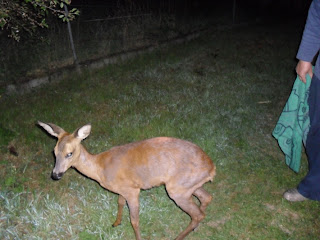 Day 7 – Good Friday – Gannay
Mark came early and completed the battery installation and checked it all out, looking good. 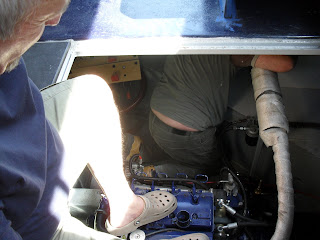 Later this afternoon we will be off to the dog rescue centre nearby and also a bit of food shopping, before we head off to Decize tomorrow.  The weather is forecast to change during the weekend to more changeable with a risk of thunderstorms, cannot complain the land needs some rain and we have had it good for a long time now.