The weather this week has been quite extreme with temperatures over 40c, that’s over 100f in old money, at the start of the week.  The temperature has dropped dramatically at the end of the week and halving in 2 days to a lowly 20c.  This morning in Meaux it was quite chilly when I took Gladys out not that she complained, she does prefer it at lower temperatures.  We are a funny race we complain whatever the weather, never perfect, need rain; too much rain; cannot sleep too hot and where has the sun gone?
The journey this week has been down the Marne a canalised river but at this time of year very little flow to aid our progress, unlike when we came up it in May when we had to fight the flow up hill. 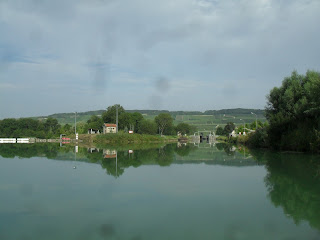 It is a very interesting river, cutting as it does through the heart of the Champagne region with its vineyards coming down to river bank in places.  The vines are now heavy with bunches of grapes, ready to be plucked next month and made into nectar of the gods. 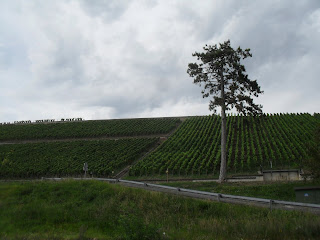 It is a beautiful area and probably best seen from the river with its numerous vineyards, grand houses and chateaux’s almost at every turn. 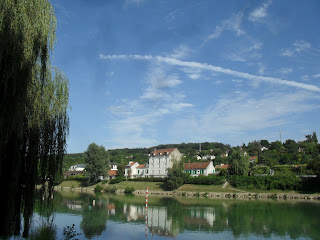 We have tended to move off very early between 7-7.30am and the stop at lunch time before the temperature got too high. 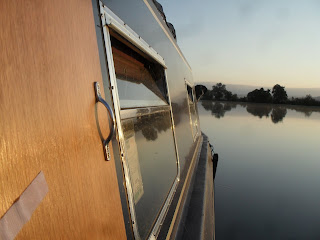 This worked well as we had the river and the locks to ourselves and we were rarely delayed.  We did have one interesting encounter when we were on a cut at Damery and rounded a bend to be met by a huge peniche and a massive floating digger which was sinking its arm into the water and dredging up silt and rock from the bottom and dumping into the peniche alongside. 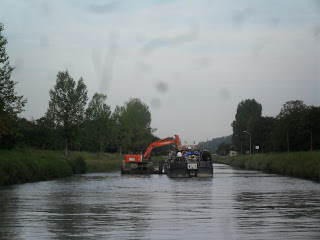 At first we looked as if we would be there for a considerable time but when the peniche captain saw us he powered his boat over and the floating digger enough for us to squeeze past.
We know the summer is drawing to a close as the boats going in our direction have been British and going past us in the opposite direction have been Belgium and Dutch going home.
Today we will visit our favourite Chinese restaurant, The Planet Dragon, for a slap up lunch.  It is great food that you have chosen and then cooked for you at the chef’s station in a huge wok.  The diet starts next month when we reach our winter mooring in Decize.