We returned from the UK late on Thursday night and collapsed into bed very soon after we unpacked the car.  The following day, Friday 15 April we spent taking the car back to the hire company and then preparing the boat for our arranged departure on Saturday.
We met Jean-Luc; he played Father Christmas in December, and he wanted to say goodbye so we instantly arranged a little farewell do in the tourist office with ‘Les Nanas’, Catherine, Isabelle and Nathalie.  Teresa had brought back an Easter simnel cake from the UK, so we took this up to the office and shared it with ‘Les Nanas’ and Father Christmas with a  bottle of bubbly.  Even though we are very glad to get going on our summer cruising we will miss these guys a lot.
The same evening, Friday, we also went to Marie-Claude’s house, our French teacher during the winter, for dinner also to say a proper farewell, we are friends now rather than teacher/ pupils.  The only problem was that I was so tired from the long drive the previous day that we called a halt to proceedings and hit the hay by 10pm as we were also due to leave at 9am the following morning. 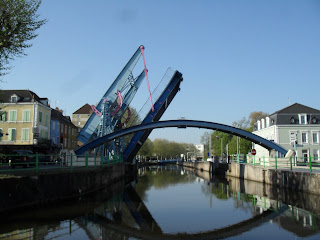 Saturday opened with a brilliant day of weather, and we set off after saying goodbye to the fellow boaters we left behind and made great progress as the lock keepers were advised of our arrival and all the locks were set in our favour, no other moving boats seen all day so we pushed on to Digoin, 44kilometers in a day.
Day one over we moored just outside Digoin and found good TV reception so I could watch the formula 1 grand Prix from China on Sunday morning before we set off on day 2.  It felt good to be underway again, the boat behaved well and the weather could not have been better, life is good.