Yes the artic weather has left us hopefully for good this winter and we are now enjoying glorious warm spring weather. 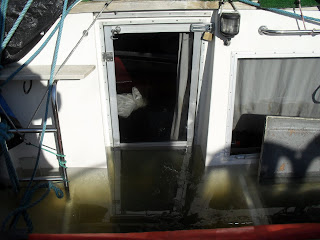 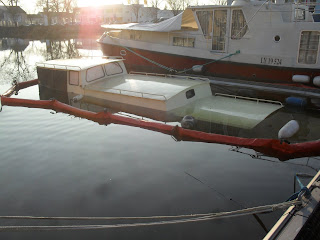 Both owners are many miles away in Australia and New Zealand, although latest information is that Keith is travelling to France and will arrive next Friday.
The Town hall is involved and the fireman and local police and I am acting as the liaison the the owners.  We attempted to lift Len’s boat on Friday by pumping out the interior but despite massive pumps being used the attempt failed and the boats remain on the bottom.
Next attempt will be next Saturday, Keith is arriving with 4 floating bags and the fireman are also bringing 6 floating bags to raise both boats next weekend.  It will only be then that we can determine the cause of the sinking, best guess at the moment is some fracture of an inlet pipe due to iced up split pipe suddenly defrosting  but nobody knows for sure.
It sure brought a dampener to the port and the joy of the better weather was curtailed.
Well hopefully we can start putting Humpty Dumpty back together again  next week and that should cheer everybody up