We left the boat very early last Sunday and drove almost non-stop to the Channel Tunnel and onward to Wales to stay with our daughter.  Its her big birthday this year and she was freaked out a bit as her birthday is 12 December, so this year it was 12-12-2012.

We started off in darkness and arrived in darkness, but in between we had a lovely day for the drive with  a great sunrise, just for Marco. 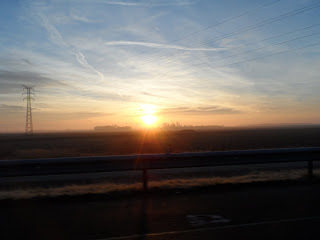 Because it was Sunday we had a very quite drive with little traffic so we made good time and arrived at the tunnel early.  Good ole Trusty the little wonder of a car which was built in 1989!!.
I was quite knackered by the time we got to west Wales, but a good welcome, a cup of tea a hearty meal soon revived the spirits.
My daughter has 2 x Jack Russell’s, a mum, Trixie, and a puppy, smudge, Gladys took to the puppy and played with her non-stop. 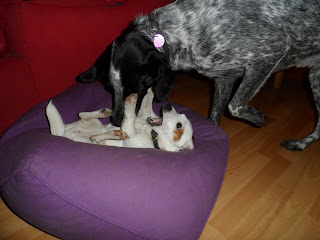 The birthday went well and it was so nice to have a family do, so few and far between these days. 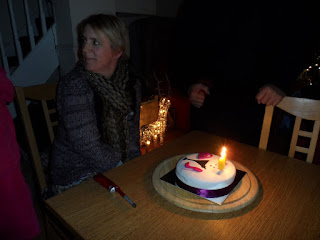 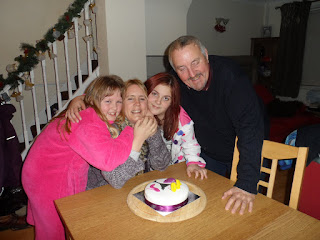 After spending time with Lizzie and the girls, we drove to Gloucester to visit our good friends, Simon, Lou, and Stanley. 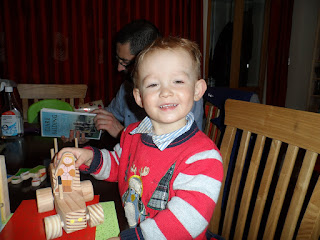 We had Christmas day early in Gloucester, as we would be back with the girls in Wales at Christmas, Stanley enjoyed his French tractor, he is growing up at the rate of knots.

There has been plenty of rain in Gloucester in recent weeks and the danger of flooding has never been far away.  I took a stroll on the decking outside our house and as you can see the river is still close to deck levels.  It will not take much more rain for the danger to return. 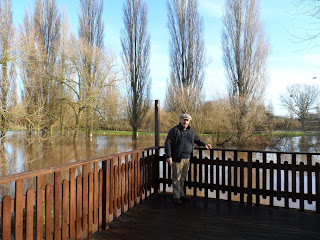 We put that all behind us and on Sunday we visited our favorite restaurant in Birmingham the Thai Edge a place we used to visit regularly when we lived in Gloucester.  The quality has never faulted and on Sunday it was as good as ever, and my first Christmas hat of the season!! 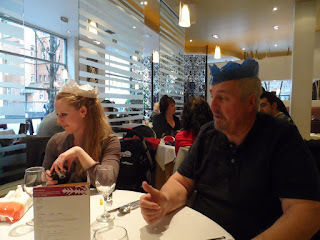 Merry Christmas to all my readers, have a good one, back to you in the new year.