Water water everywhere and not a drop….
Two days of traveling in the pouring rain, plenty of locks and eclusiers worrying about the amount of water in the canal. 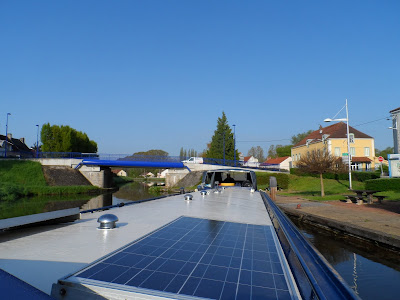 We left Blanzy early on Thursday morning following the national Labour Day closures in France May 1.  The weather for a change was sunny and warm, following several days of thunderstorms and deluges which left the canal full of water and surrounding countryside flooded.  This is unusual for this canal which often is plagued by a lack of water…not this year. 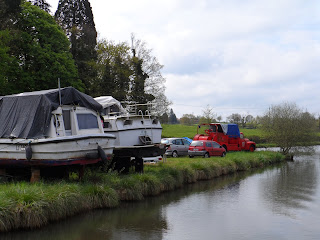 After a couple of hours we passed Montchanin where I had left Trusty, the car we share with Len the Aussie, who is due over in a couple of weeks to put his boat back in the water, which should give him a great deal of satisfaction after the sinking disaster he had last winter.
Montchanin is the summit of the canal du centre and after a few kilometers you start the long descent to the Saone. 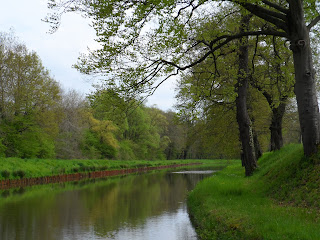 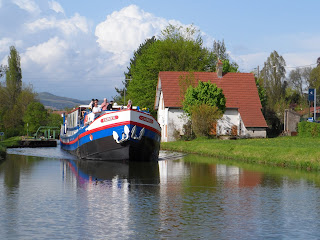 A surprise meeting with a hotel boat, the clients were enjoying the weather but they perhaps should have looked over their shoulder.
The weather soon turned cloudy and the rain returned with a vengeance, and it rained continuously for two days making an already flooded area worse.  It also slowed the lock operation down as the large amount of water in the canal washes over the top of the lock doors when traveling downstream and slows down the opening of the front doors. 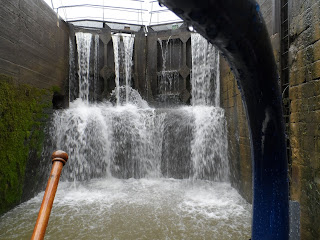 The deluge over the back lock gates.
So progress was slow but with few other boats on the canal we made Fragnes early afternoon on Friday. 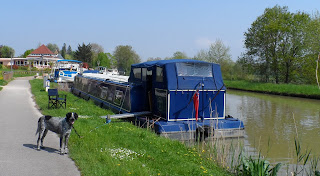 The mooring at Fragnes with a sunny afternoon at last.
The bad news is the river Saone is in flood and as we intend to travel up stream when we do leave here, we will have to wait for several days if not a week before joining the river.