Been here for a week now, doing more jobs on the boat and riding out some rough unseasonable weather.   Tomorrow is a national holiday in France and the canals are shut for the day, so we are going to move off on Thursday 2 May, heading for Fragnes at the end of the canal du centre, where we will wait until the river Saone flow calms down a little bit and allows us to get up to St Jean des Losne. 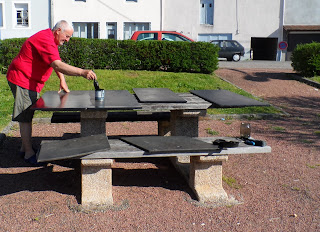 Painting the walk boards on one of the good weather days at Blanzy.
Depending on the state of the river we will either turn left on to the canal de Bourgogne, or if it is benign by then we will push on towards Strasbourg.
The season has started despite the poor weather, and the social scene has begun with now New Zealand friends Adrian and Lorna on Ariana having 2 nights of fun, talking and drinking on each other’s boat.  Nothing dramatic but pleasant enough stuff and a good foretaste of summer evenings to come can’t wait for the first barbecue and sitting outside putting the world to rights.
We were intending to stop at our old winter stopover Montceau-les-mines but reports of the noisy night club had forewarned us that this might not be a good idea, and reports proved to be accurate as boats stopping at Blanzy having just left Montceau confirmed that noise from the club continued into the early hours over the weekend and prevented them getting any decent sleep.  Such a pity the Mayor has not dealt with this problem as the town of Montceau is a decent place with many amenities to recommend it.
We did meet up with Isabel and Catherine from the office and many kisses and hugs and requests that we return for this winter.  However, unless they sort out the noisy club nobody will want to stay in Montceau in future, but it was good to meet up with our best girls.