It has been a long time since my last Blog and I have had a few emails and other words of complaint, so I am now going to put that right, and try to publish a more regular entry.

The last Blog was when we were at Clamecy having a splendid time at the water festival.  Since then we have continued the slow trip down the Nivernais, mostly accompanied by Chris and Jac on ‘Jolie Roger’. 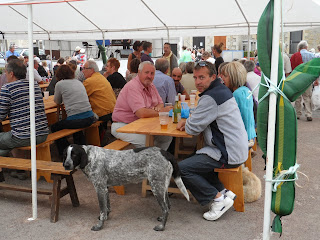 The weather stayed brilliant for the whole of August and well into September   and in fact as I write this Blog it is still bright and warm.  I still remember May and June this year which were really awful and did not bode well for what turned out to be a splendid summer. 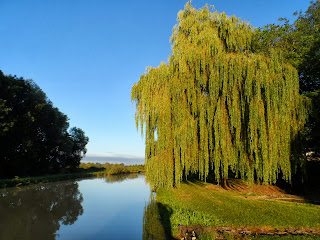 The end of the summer brings on a wide selection of vide greniers/brocantes and puces, basically car boot sales and flea markets.  We enjoyed ones at Cercy-la-Tour, Champvert and an enormous one recently in Decize.  They are very popular over here and well attended.  We managed to pick up a few treasures at these events but mainly it is a great atmosphere to enjoy. 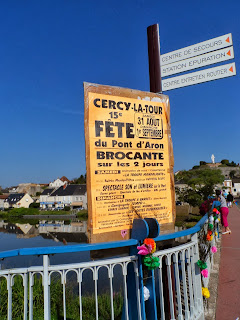 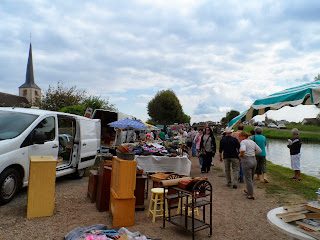 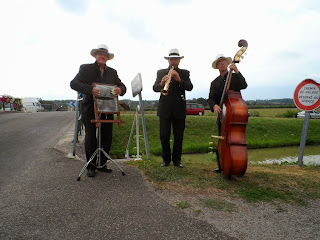 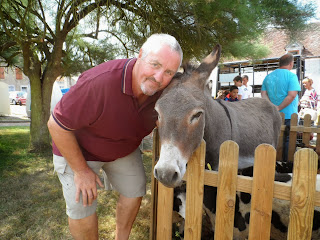 During the summer it became increasingly obvious that our leisure batteries needed replacing to allow us to moor without a hook up to power.  Also I wanted to increase the solar panel array on the roof to keep the new batteries charged to give us even longer off the grid and better cruising options next year.
We went around to Gannay to get 4 new batteries from Mark at Entente Marine, and also to spend some time with Mark, Celia and Hal the new dog, who is very fond of Gladys. 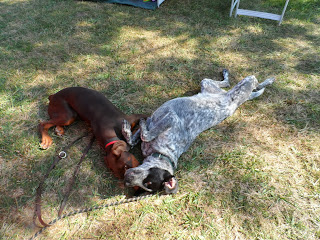 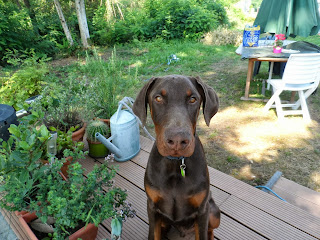 It was whilst fitting the batteries in the tight engine room that I also made another big decision, that being to lose vast amounts of weight and get fitter, more of this later.
Having finally installed the new batteries with Marks help I also sought his advice and guidance on the solar panel array.  Andy and Wendy on Mary Rose were also at Gannay and were busy installing a solar panel array on their boat too.  It will be many years before either of us to see a return on the investment in solar panels but, for me, that was not the point.  The main reason was give us more options when cruising. 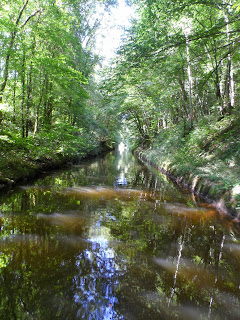 If you are doing limited cruising or have ready availability to cheap shore power it is not a recommended solution.
Mark and I searched the internet and found some good ones at bargain prices in Czechoslovakia!!  There was a gamble  involved in getting supplies this far away but having researched the company as much as we could they seemed very professional and had a good reputation, so we ordered the panels , the wiring/connectors and the controller and waited around for them to arrive.  They did arrive in very quick time and were in perfect order so we loaded up and headed back to St Leger to install them and generally prepare for winter.
Gladys is growing up into a less skittish dog, losing her puppy ways and generally settling down.  She still gets the red mist from time to time and runs off only to return some time later looking sorry for herself.
She has had one dramatic incident. One night at St Leger having arrived from Gannay and finding nowhere to moor up; we butted up next to David and Toi on ‘Whisper’.  At first this did not present a problem as when I first took Gladys out in the afternoon it was dry and bright and although Gladys and I found it a bit of a stretch to get over the front of ‘Whisper’.  We managed it quite well.
Later that evening after I had fallen asleep in the chair, not an unusual occurrence, it was approaching midnight and Gladys needed her final walk and emptying.  We got ready, and then I realised it was lashing down with rain and the street lights had gone out.  I went first and got onto ‘Whisper’ but when Gladys made the leap across between the two boats she slipped and was hanging from her lead between the two boats, I was making an effort to drag her up onto the deck when she slipped out of her collar and into the water, and disappeared.  I turned on the torch but there was no sign or sound of her.  Panic began and I called her and searched the area around the boat but still no sign or sound.  I thought the worse and stood there feeling useless when from 60’ away at the front of the boats I heard a splashing.  I rushed to the front and saw her thrashing away in the dark water.  She did swim toward me but could not get out as the quay was too high so I hang over the quay and gradually hauled her up by whatever bit of Gladys I could get hold of and eventually she scrambled over my back and then ran off in panic.
I went into the boat and woke Teresa who had been oblivious to the events and she joined me in the search.  An hour and half later I tracked her down ad brought her back to the boat but she was very reluctant to get back across the two boats!!  She is fine now and seems to have suffered no ill effects mentally or physically, and she is enjoying life to the full again.
Gladys is OK, the boat is working fine with its new energy source on the roof allowing us to turn off the shore power during the day and we now turn our attention to jobs needing to be done in the next six months, but before that we turn our attention to our own health.  We are both overweight and unfit although taking Gladys out helps, but we need to do more.
We bought our son James and his partner a Juicer recently and it has revolutionized their eating habits and lifestyle, so much so that we have joined in.  We downloaded a couple of juicing books and now set out to have a juice drink for breakfast and another lunch time and only eating a main meal in the evening, and surprise surprise it works. I was most worried that I would get tremendous hunger pains during the day but so far none have occurred and the weight is dropping.  Watch this space… 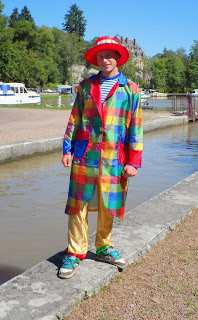 An unusual looking lock keeper but made me smile.