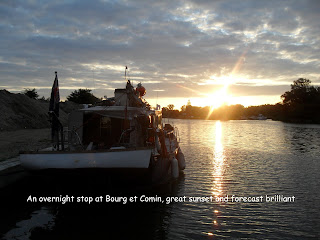 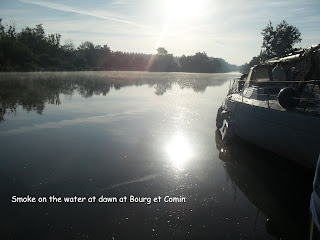 We are now in Soissons, north east of paris. We left St Jean de Losne on the 1st August and arrived at Soissson yesterday the 19th August a distance of 420 kilometers by boat, with 10 of those days in really lousy weather, in fact the worse rainfall France has encoungtered in August for many decades.

Most days we set off after 9 am and stopped by no later than 4pm.  The boat performed extremly well with no issues to speak of and we enjoyed the trip despite the rain,

In the last few days the weather has picked up very well and we are now enjoying very good weather.  The pictures show sunset and sunrise at Bourg et Comin where we stopped 2 nights ago.

We have had no flooding issues although I know from emails and news reports that some rivers in France were closed to navigation in recent days.  Poor old Harry and Marion, ‘Driftwood’, got trapped on the Doubs earlier this week when it was closed, although I heard today that they were alllowed to move again yesterday as the waters have dropped and the river and canal are once again seperate items!

My daughter lizzie and the two granchildren arrive next week and we are are going to rest up in Soissons this next week and prepare for their arrival.  Soissons is an OK place a bit like Meaux in that it is close to Paris and the natives seem a bit tighter than in the south.  Still smiling for the most part but with a bit more edge. Also you notice the wide diversity of nationaliites and cultures in this area.  Soissons is heavily dependent on industrial processes and in the recession I imagine this area has been hit harder than in the agricultural and tourist south which seems to be still booming.

Market day here tomorrow, so that will give us further insights in what is on offer and the prices.

More photos have been posted at http://picasaweb.google.co.uk/terrybarrett42