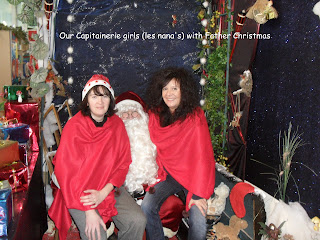 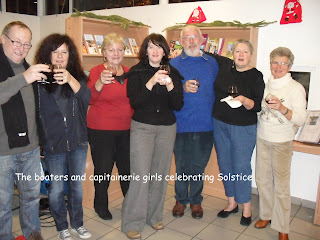 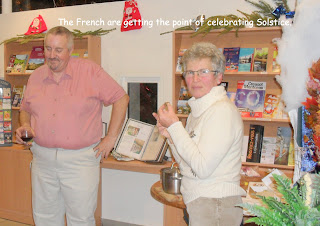 Well we had a party to celebrate the Solstice, the French are gradually getting my point of the start of summer being December 22nd, more pictures available at:

We had a spendid party and summer has started, if I say it loud and often others will start to believe me.  Its all in the mind anyhow, days get longer now and the nights shorter and soon after Christmas the first flowers will start poking through..its going to be a great summer
We are rapidly approaching Christmas and the cold weather has past now but will return later this week, a white Christmas ??
However, we were looking forward to firing up the engine and setting off up the canal to collect Father Christmas on Saturday 18th and delivering him to the expectant children in the centre of town. However, that was not to be and we held a small meeting in the tourist office two days before the scheduled arrival of Father Christmas and decided a plan B was required as there was no early prospect of the ice in the canal releasing its grip on the boat, very quickly they organised a horse drawn carriage for the delivery. This town does not stop impressing me, they produced a brochure for the arrival of father Christmas with times of arrival, how the children should line up and the candle light procession arrangements at the end to see him on his way, not forgetting an open invitation to the town hall for hot chocolate drinks for the kids and hot wine for the adults. There is a lot of pride in this town to do things right and we feel very welcome here.
Our fellow live aboard Brits Peter and Angie are off now for a week to spend Christmas in UK and we are looking after their dog Kes while they are away. We are looking forward to having Kes on board as he will get us out of bed earlier than normal and the increased exercise won’t do us any harm. We are determined to lose large amounts’ of weight before we set off in the Spring so the exercise will kick off the process directly after Christmas.
We are planning a trip back to the UK in the new year but trying to find the cheapest route back which will also allow us to see the people we miss most. The best way would be to borrow a car for a week or two but no luck with that to date so the next cheapest way is cheap flights from Paris to Dublin, then hire a car in Dublin (Cheap), then drive up to Belfast to see the lovely Marion and himself (Harry) for a few days before catching a ferry with the car to UK to visit John and Jenny in Preston before driving down the M6/M5 to Gloucester to see our son James and Simon and Lou and the new baby. After that we can drive down to see our daughter Lizzie and the grandchildren before catching a ferry at Fishgard back to Ireland to return the car and catching flights back to France, now what could go wrong with that plan !!!